New RZG: The whole cow at a glance - over Generations

In April 2021, the RZG will be published in a new composition. In its weighting, it combines all the important main points of the breeding objective for German Holsteins.

A revision of breeding values is not unusual. Often this is done to refocus a breeding value or to include newly implemented breeding values with overriding importance for the breed in an index. In the case of the RZG, both aspects can be mentioned as reasons and are to be understood as a consistent further development of the total merit index towards more animal welfare.

What is new in the RZG? 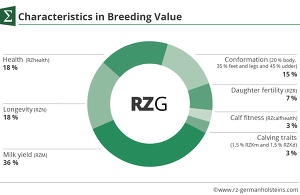 The composition of the new RZG

With the reweighting of the overall index, the health breeding values RZhealth and RZcalfhealth published in 2019 are now also taken into account. Furthermore, in addition to feet and legs and udder, the trait complex body is also included in the RZG. An observation of the development of important body traits in the population led to this step.

While the RZhealth is newly included in the RZG, the milk production (RZM), the longevity (RZN) and the fertility (RZR) lose weight in benefit to the health breeding values. Since the RZhealth can be used to directly improve animal health through breeding, the importance of the previously used secondary traits for animal health (RZS, RZR and RZN) decreases. The RZN and RZR are positively influenced indirectly via the RZhealth. As a result, the reduction of the weight percentages in the index does not have a negative effect on the development of the traits. The removal of the breeding value for Somatic cell Score (RZS) is performed in favour of the mastitis breeding value in RZhealth. The RZhealth more directly reflects and influences udder health.

The reduction of the RZM in the RZG allows a stronger focus on functional traits in the already high performing German Holsteins without compromising the economic importance of this breeding value. Overall, a breeding improvement in animal welfare can therefore be achieved.

Development of the RZG

The development of the RZG from 1996 to today

There is a constant development in breeding. On the one hand, the technique of breeding value estimation is constantly developing and on the other hand, the demands of farmers and society are also increasing. Therefore, the focus is on balanced breeding, e.g. in addition to performance traits, health and robustness play an increasingly important role. Whereas until the mid-1990s only milk production could be handled by breeding, gradually new functional traits became available, so that today fitness, robustness and health of the animals are in the foreground. At the same time, milk production has continued to lose weight with each adaptation of the RZG. Today, RZM has only a weight of 36% in the RZG, but it still guarantees an economic basis for farmers.

The modification of the RZG is therefore a necessary but nevertheless cautious further development of an already good total merit index, without completely changing it.

The advantages of the new RZG 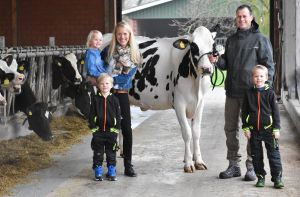 The new RZG - A total merit index over generations

With the RZG and the RZ€, Germany has two valuable and up-to-date indexes (total merit and net merit) at its disposal. The RZG is the traditional version of a total merit index, oriented towards the breeding objective of the German Holsteins, due to the proportion of functional conformation. The RZ€, on the other hand, is a purely economically oriented version and therefore a net merit index. With both breeding values, however, the entire profile of a complete and high-performing cow is not lost sight of. Which index is used for the selection of male and female breeding animals depends largely on the breeding philosophy of the individual farm.