Focus on Performance and Health

The RZ€ focuses on the economically relevant characteristics in milk production. The clear focus of the breeding value is on production, fitness and fertility traits. The combination of production and fitness traits ensures a balanced and high-performing herd. The traits and the weighting of the RZ€ are especially adapted to the income and cost structure of German farms and thus promise maximum success. The high security of the German breeding values allows a high breeding progress. 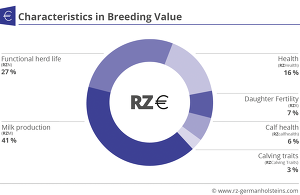 Composition of the RZ€

The breeding value for the useful life is included in RZ€ with 27%. An increase of the useful life makes economic sense, as the rearing of a calf to a finished dairy cow is one of the most significant cost factors in milk production. By increasing the useful life, the rearing costs of 1,800 to 2,000 euros are spread over more lactations or more kg of milk. As a result, the overall costs per kg milk in the production are reduced. Another positive effect: rearing capacities are freed up, as fewer calves are needed to reassemble the herd.

Healthy cows save veterinary costs and valuable working time. The RZhealth has a weight of 16 % in the new economic total index RZ€. The RZhealth allows a targeted breeding against udder diseases (RZudderfit), metabolic diseases (RZmetabol), claw diseases (RZhoof) and fertility disorders (RZrepro). The direct health breeding values show an excellent safety. The high weight in the RZ€ promises a stable herd health and last but not least the saving of medication.

Fertility is one of the most important success factors in milk production. Only fertile cows become pregnant on time, even at high performances, and thus lay the foundation for the following lactation. The integration of the breeding value RZrepro for daughter fertility in the RZ€ enables fertile cows and heifers as well as successful inseminations.

Calves have the highest genetic potential of all animals on the farm. The RZcalfhealth is weighted with 6% in RZ€. This supports the vitality and health of the calves and minimises losses during the rearing period. An easy and unproblematic calving is crucial for the calf as well as for the mother animal for a good start in life or lactation. The RZ€ includes the breeding values calving maternal (RZKm) and calving direct (RZKd) with a total of 3%. This ensures that breeding decisions based on the RZ€ also maintain the calving ease of German Holsteins in the long term.

In times of strongly fluctuating milk prices and rising production costs, it is more important than ever to orientate milk production economically. Farm branch evaluations show that, in addition to optimized feeding and structured management, the use of good genetics is a decisive success factor in milk production. The breeding value portfolio of German Holstein breeding includes estimated breeding values for over 50 individual traits. So it is not easy to find the economically optimal sires for the farm. The new RZ€ offers the solution! This total breeding value is derived and composed according to the economic needs of dairy farmers. The RZ€ takes into account not only the income side with the milk quantity and ingredients, but also the expenditure side with fitness and fertility characteristics. The RZ€ reflects the entire income and cost structure of dairy farming. This makes it unique. The RZ€ is not expressed on the usual relative scale, but on the new Euro scale, which refers to the entire cow's life. This makes the value of breeding decisions easy to understand and makes it easier to weigh up different genetics.

The RZ€ is based on an economic evaluation of the individual characteristics. This was carried out by the data centre vit in extensive research using data from the Chamber of Agriculture of Lower Saxony, branch of business evaluations and billing information from veterinary practices. The RZ€ therefore contains real business management key figures of German companies. The RZ€ is thus optimally adapted to the German branch and cost structure. Since costs and yields are naturally subject to fluctuations, the economic evaluation of the individual characteristics is reviewed at regular intervals and their weight in the RZ€ is regularly adjusted. In this way, the RZ€ will continue to meet the requirements of dairy cattle farming in the long term.

For the RZ€ the decision was made to integrate neither conformation traits nor somatic cell count. This may be surprising at first, but on closer inspection it is only logical and consistent. The conformation is difficult to evaluate economically and has no direct influence on the profitability of the farm for the majority of the farms. Breeding for type is not an end in itself, but is intended to improve the functionality and health of the animal. This can be achieved effectively with direct traits (for example with RZhoof and RZudderfit). The positive correlations between fitness traits and feet&legs & udder guarantee continued breeding progress in this area even without direct integration into the overall breeding value. The somatic cell count is an important parameter of milk quality and a helpful trait for udder health. In breeding terms, however, the focus is on improving udder health and for this the direct breeding value RZudderfit is the much more precise parameter. This is why this is a component of the RZ€. Due to the strong positive correlation between RZudderfit and the breeding value for the somatic cell count, breeding progress is also achieved with the somatic cell count.